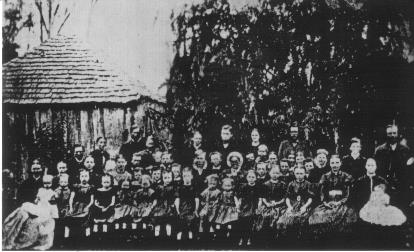 This group portrait  is one of Youdale’s few surviving images and was described in newspapers of the time:

The Maitland Mercury has been shown by Mr. Youdale, the photographic artist, a group picture taken by him of a family named Lambert, residing at Oswald, near Lochinvar. The number of figures in the picture is fifty, and the grandfather, his wife and family, his children's family, and a great grandchild, are represented.  [1]

Photography was not Joseph Youdale’s only business activity. He appears in the Maitland Mercury in 1850, selling 'very superior clarified lamp oil' from his premises in High Street. [2]

His High Street property, backing onto the Hunter River, becomes the source of tragedy, enterprise and devastation for Youdale and is perhaps a good illustration of Maitland’s relationship with the river through history.

In 1855, Youdale’s 22 year old son, John, is accidentally drowned in the river when bathing with friends. The jury at the inquest “…begged to recommend the coroner to call particular attention to the want of a suitable drag and boat in the case of accidents which happen in this neighbourhood.”  [3]

Flooding of the river causes problems in 1857, when a stable of Mr Youdale’s , ‘built in dangerous proximity’ to the river collapses in the flood. [4]

In September of 1860, Youdale makes use of the proximity of his property to the river for a business enterprise – the Maitland waterworks:

WATERWORKS IN WEST MAITLAND.-But few of the residents of Maitland, probably, are aware that for some time past works have been in course of erection for the supply of water to the town on a scale before unattempted [sic]. The undertaking is due to the enterprise of Mr. Youdale, who has fitted up a powerful force pump, worked by a steam-engine, at the back of his property in High-street, the contiguity of which to the river bank, and the central position it occupies, alike favouring the success of the project…. The value of so copious and accessible a supply, in the event of a fire, will be fully appreciated should the want of it unfortunately arise.  [5]

The unfortunate ‘event of a fire’ became a reality in both January and July of the following year, when Youdale’s water was used to great advantage in fire fighting. [6]

It is another seven years before Youdale becomes involved in commercial photography, when Liddell takes Youdale as a partner in his established photography business in January 1867. [7] Youdale becomes sole proprietor in July of that year, promoting carte-de-visite, cabinet and glass pictures.  [8] 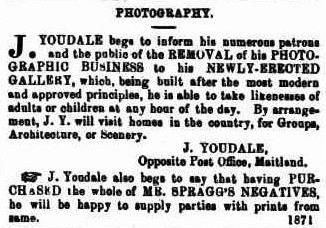 The erection of a new gallery sees a relocation from opposite Rourke’s in High Street to opposite the post office, remaining on the river side of High Street.  [8]

With regard to the acquisition of Mr. Spragg’s negatives by Youdale as referred to in this advertisement, it is unlikely to have been an onerous responsibility, given that Spragg was in business for only two years between May 1867 and March 1869. 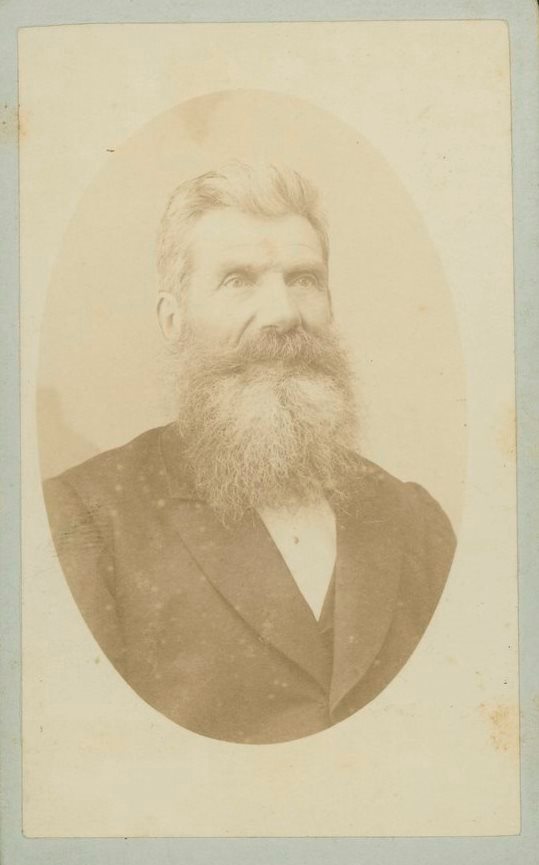 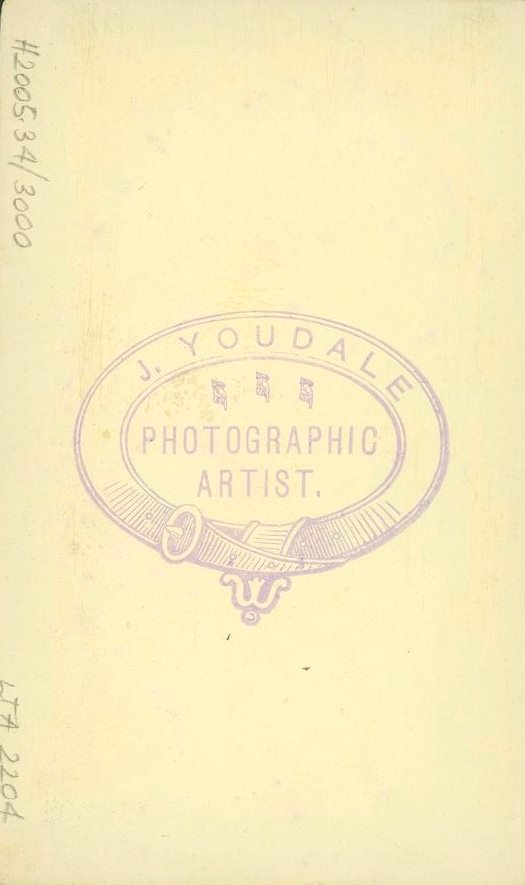 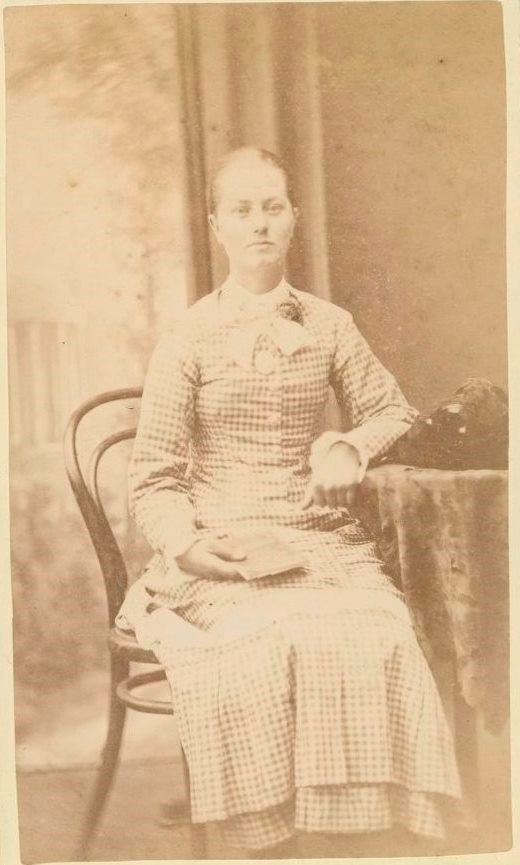 YOUDALE’S NEW GALLERY is on his own premises opposite the Post-office,
where, having uninterrupted light, he is able to TAKE INFANTS INSTANTLY,
and ADULTS IN ALL WEATHERS, from six to six.

Likenesses for Lockets, Brooches, and copying done with care.
J.Y. invites inspection of his specimens. Parties re-taken is not approved,
but J.Y. is determined not to send out an inferior picture.

The claim of “successful photography” in the new gallery assumes all is going well in January of 1870, but the river is again wreaking havoc for Youdale, the photographic gallery and the tank belonging to the waterworks collapsing into the river in a land slip. [11]  Not surprisingly, Youdale is named among a group of people with regard to protecting the river bank.  [11]

The impressive residence named ‘San Souci’ was photographed by Youdale in 1870, also the subject of a photograph by Curtis, circa 1874.  [12]

Among some recent out-door photographs, we suppose put forward by the rival artists as specimens of the proposed series of views, was a view of Sans Souci, by Mr. Youdale; and by Mr. Moss, a representation of the great landslip at the rear of Messrs Owen & Beckett's premises, both very meritorious, each in its different way.  [14]

In harmony with the riverbank, Mr. Youdale’s fortunes continue to decline.  One evening his horse bolts and he is thrown, rescued by Mr. Albert Gorrick and attended by Dr. Scott. His injuries are not serious, ‘severe shock to the nervous system’ from which he recovers. [15] Later in December 1870, insolvency is declared, the cause cited as the portrait gallery and waterworks having been washed away by the floods. [16]

Brunker and Sparke receive instructions to auction Youdale’s property and possessions, including horse, saddle and bridle, as well as 3 cameras and 4 lenses. [17] By March 1873, Youdale’s name appears in the Sydney Morning Herald, selling photographs of the new Oddfellow’s Hall in South Head Road.  [18]