PHOTOGRAPHS OF THE FLOOD.-During the flood which deluged Maitland last week Mr. George Kedwell, manager for Mr. M. Moss, of the well known Elite Studio, was busily engaged in securing views of the disastrous visitant from the best positions, and we have been shown the fruits of his labours. The views number sixteen, and many of the photographs are really artistic reproductions of stirring but melancholy scenes, being clear and well defined, and should be in request as mementos of one of Maitland's unhappy seasons. One is a view of High-street from the Bank of New South Wales, another showing the Exchange Hotel, whilst a remarkably lively one shows Mitchell's Arcade with a number of persons standing knee deep in water around the large lamp in front of the Mercury office, a conspicuous figure being that of Alderman Gillies. A view of the High-street embankment is a very interesting picture, as from it can be formed an idea of the difference in the height of the imprisoned water in the river and that in the street opposite, with the remainder of the thoroughfare to the High-street crossing. A photograph of this office shows that a pressman's life is not altogether a happy one, for it discloses Mr. Gillies, the Editor, and some of the staff standing in the flood ; then follow pictures of the Volunteer Hotel, the Town Hall standing high and dry, Carrington-street for the nonce occupied by boats, the flood gates, etc. Some other views taken of the water at its highest points were supplied to Mr. H. C. Russell, Government Astronomer and the Picturesque atlas Company which has written as follows:-" We have to acknowledge receipt of the two photographs of the Maitland flood, and for which we thank you very much. The photographs are very nice, but the stern reality must indeed be something terrible."

The image below is thought to be one of Moss' photographs of the 1893 flood, however the description of one of Kedwell's 1890  photos seems to be similar, ie.  'a remarkably lively one shows Mitchell's Arcade with a number of persons standing knee deep in water around the large lamp in front of the Mercury office,  conspicuous figure being that of Alderman Gillies.' 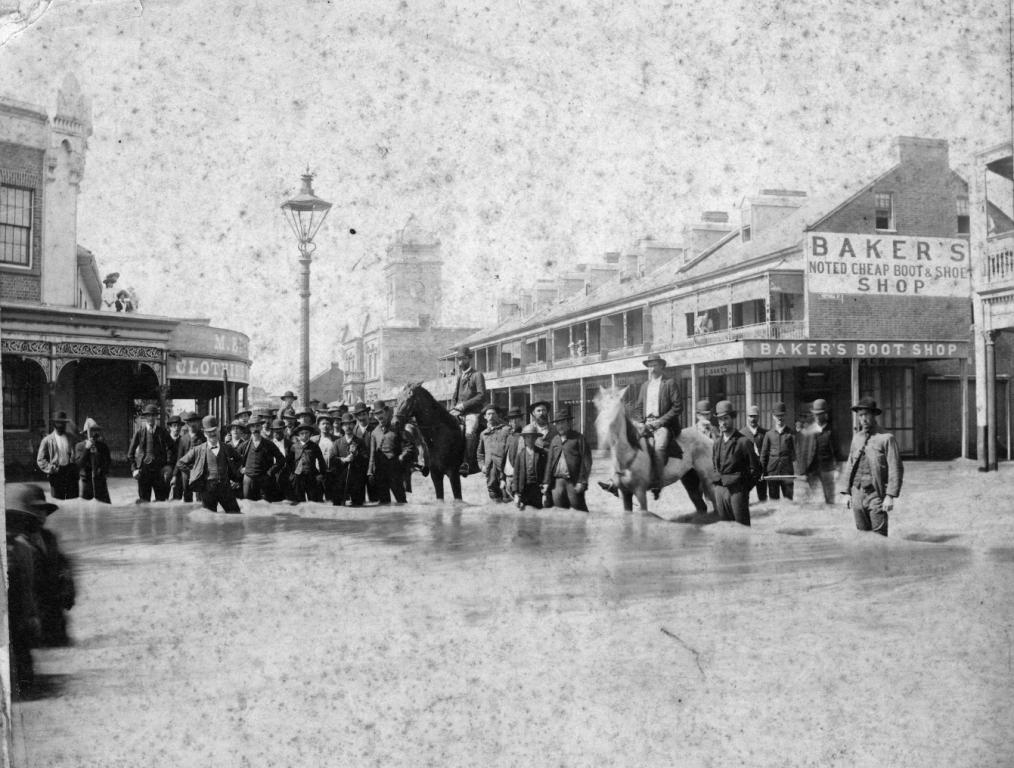