The photographic business of Liddell and Blitz in George Street, Sydney, was offered for public auction in June of 1865, “The proprietors are selling on consequence of leaving the colony.” [1]

Rather than leaving the colony, Liddell appears in Maitland in February 1865.

He poses a photographic challenge in the Maitland Mercury of Tuesday 14 February 1865, [2] with tenacious Jacob Audet rising to the bait:

TO MR. LIDDELL.
SIR-Having seen your Challenge to Photographers in Tuesday's issue of the Mercury, and being the only artist who has received the commendations of the Metropolitan Press, I am happy to ACCEPT the same for any sum you may think proper to fix; the competing productions to consist of Sennotype Portraits, Ivorytypes, Cartes de Visite, Vignettes, and Glass Pictures, of all dimensions. The conditions, as well as the appointment of judges and umpires, can be arranged whenever the money is put down.  JACOB AUDET,   Photographic and Sennotype Artist. West Maitland, Feb. 17, 1865. [3]

A week later, Audet continues the confrontation, but with no response from Liddell, the great challenge wanes. [4]

With a large advertisement titled “A few hints”, photographer William J. Liddell advised potential clients on the most suitable attire for their carte-de-visite and recommended that they were more likely to have a pleasant expression if the photographer is in good humour. These same hints continued to be delivered on a weekly basis in the Maitland Mercury between December 1866 and mid-January of 1867. The advertisement of Liddell’s competitor, Elijah Hart, appears directly above, emphasising the superiority of cabinet portraits. [5]

Mr. J. Youdale is taken as a partner in the business in an announcement of 12 January 1867, when mention is also made of the photography of landscapes as well as portraiture: [6]

The large ‘A few hints’ advertisement is repeated for several more months, under the names Liddell and Youdale. 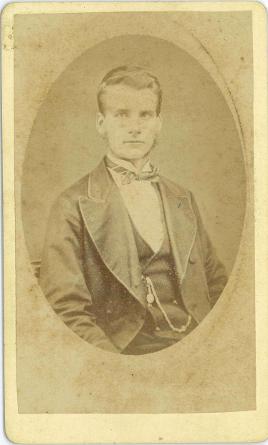 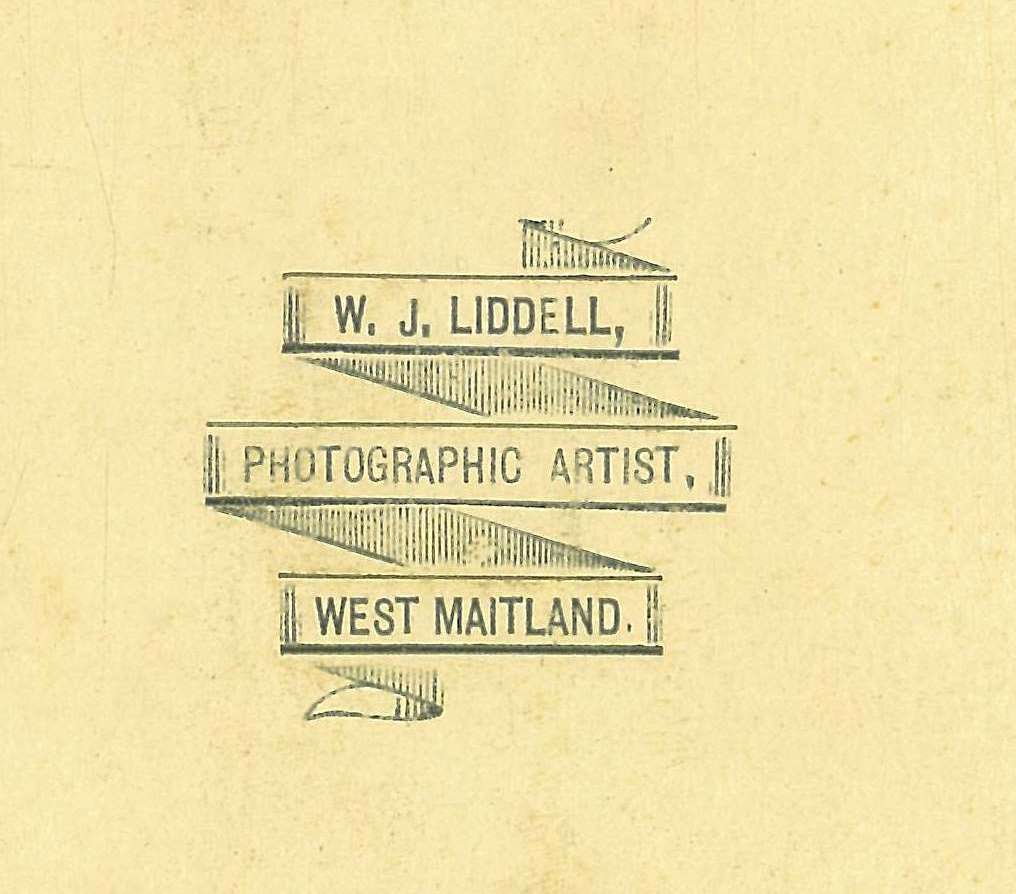 By July of 1867, Youdale takes over the business as sole proprietor, informing the public that “At very considerable expense he has secured first-class instruments, rolling press, and everything necessary to turn out a thoroughly finished portrait, either in carte-de-visite, cabinet style, or glass picture."  [7] 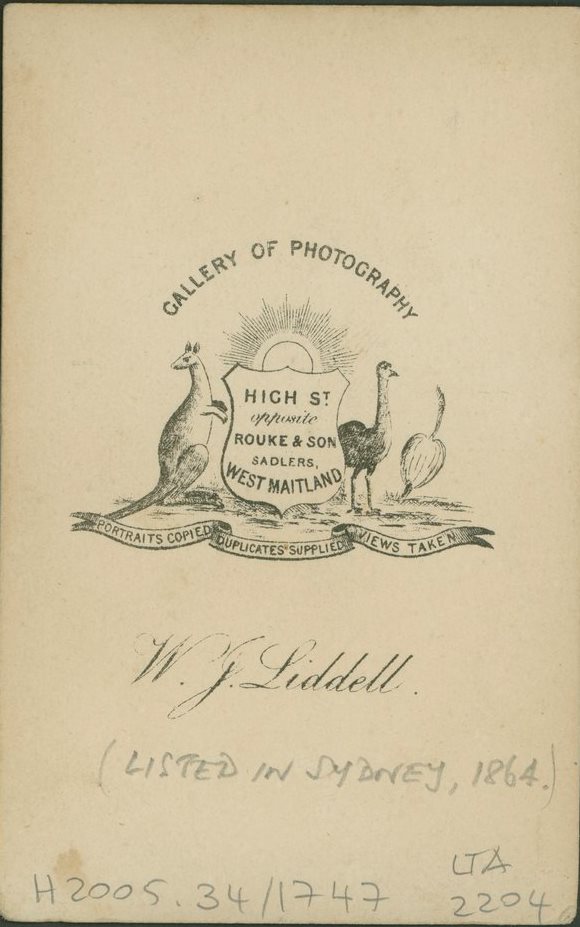 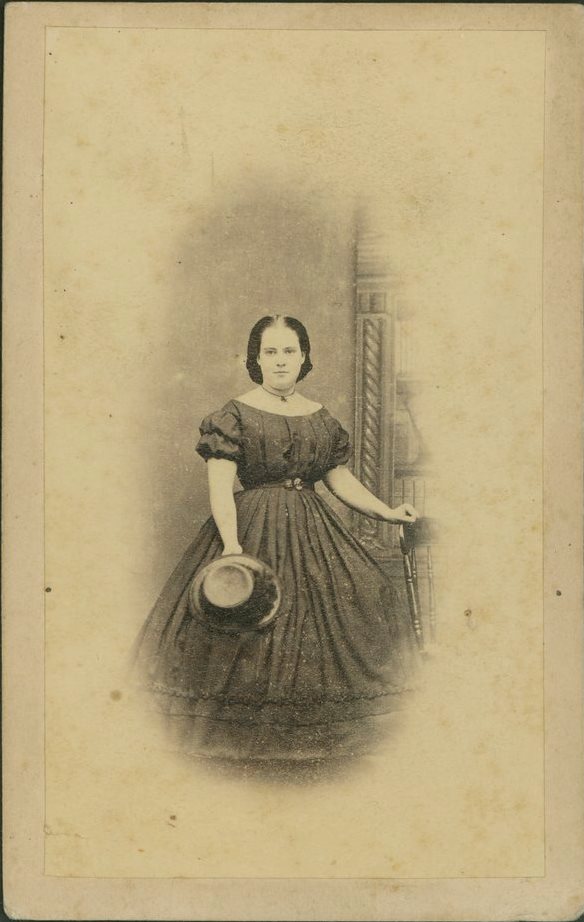 Liddell is not mentioned in the media again until October 1873 [8] and is referred to as a photographer from Largs and Greta in 1874. [9] A Maitland Mercury report on 15 September 1874 relates to a charge of larceny against George Weston, a coal miner, for the theft of a camera lens from Liddell’s photographic gallery at Greta.  The defence attorney argued for an acquittal and with a verdict of not guilty, the prisoner was discharged. [10]

Only 4 days later, Liddell’s business was the subject of another court case, this time in relation to Randolph Gellatley, son of the proprietor of the inn at Greta, who was being taught photography by Liddell. It was argued that since the plaintiff was a minor, no contract could have been entered into, the judge directing a non-suit. [11]

Difficulties in the Liddell household continued, with Mrs. Liddell cautioning the public that they should not assist her runaway son, who apparently wears his hat ‘carelessly’ according to his mother’s description:

The photograph below has been annotated as ‘Abraham Henry Card’ however this cannot be verified as the correct name of the boy.

It also appears that there may be a stand or headrest behind the boy, the base visible at floor level, just behind the feet. Earlier photographs required the subject to stand still for a period of seconds and studios utilised a range of headrests or stands to facilitate this. [13] [14] 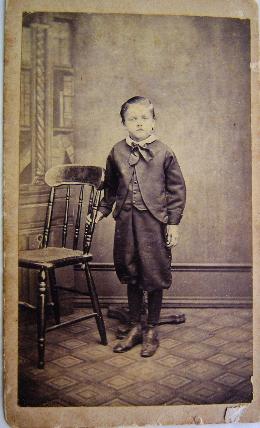 Liddell reappears in Maitland in 1878, improvements to the gallery described:

Mr. W. J. Liddell has just had some valuable additions to his portrait rooms in High-street. The floor has been raised some three or four feet, which will have the effect of throwing a more even light on the portrait room. The whole of the interior has been papered and painted, and finished in a first class style. The reception and dressing rooms have been improved and made more complete. Other additions are contemplated. Altogether the improvements are of a very neat character. [15]

According to his advertising, Liddell has made a ‘successful tour of the Australian colonies’and as a ‘landscape and portrait artist’ can be consulted at the Bank Portrait Rooms, opposite the Bank of New South Wales in High Street.  [16]

Appearing in court again in December 1878, Liddell was claiming £10 10s from a customer, who declared the photographs to be ‘not correct representations’. The plaintiff was non-suited, the case terminated. [17]

Business continued at the Bank Portrait Rooms, with portraits finished in oil or crayon, ‘cattle taken by the instantaneous process’ and new style portraits taken and finished in five minutes, [18] but Liddell sold out to the British Photo Co. in April 1880. [19]

In addition to the extensions and alterations to the studio, The British Photo Co.  drew attention to the ‘now so much in favour’ tintype portraits. 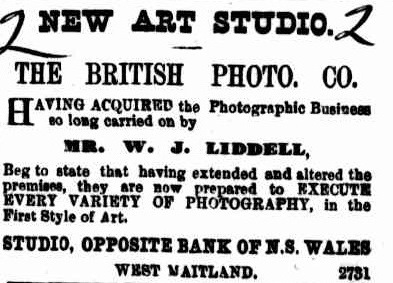