Advertising that he had “just arrived from England” in October of 1855,  [1]  it seems that Henry Stoke’s sojourn in Maitland was relatively brief, the photographer moving on within twelve months.

Stokes headlines his range of photographic processes: collodion, calotype, albumen and daguerreotype images, as well as having 'great experience with the first photographic artists in London'. [2]

The photographic business was presumably not as lucrative as Stokes anticipated, since his advertising through February and March of 1856 indicates that he has “commenced painting, in all its branches, gilding, &c.” together with a range of additional services including gigs and carriages being repaired and painted. [3] 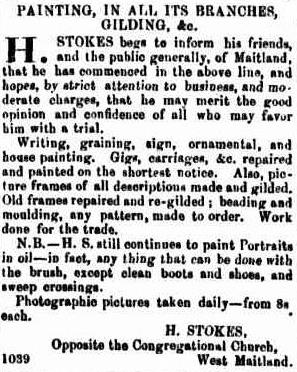 An altercation after a court case involving Stokes in June of 1856 is the last mention of the photographer in the Maitland Mercury, which is perhaps not surprising since the event was precipitated by the non-payment for a portrait that was considered to be “not a true likeness”:

CHARGE OF ASSAULT.-James Mayo appeared before the bench at East Maitland, yesterday, charged with assaulting Henry Stokes, at East Maitland, on the 4th inst. …The action was brought by Stokes to recover a sum of money due to him for the painting of a portrait, but payment had been refused on the ground that it was not a true likeness. Upon Stokes leaving the Court, and on his road home, he met Mayo coming, and told him that he was too late, and that a verdict was given against him. After a few high words between them, Mayo struck Stokes with a whip, and continued to do so as they rode along, telling him he "would give him a verdict."  The bench fined the defendant 40s., and costs of court. [4]

Images by this photographer have not yet been identified in the course of this research.