Sydney daguerrean artist John Wheeler made use of rooms at Mr. Readings store at Victoria Bridge to establish his operations in Maitland, trading there from February to July in 1855. [1] Wheeler’s skills included the ability to produce plain or coloured daguerreotypes, oil paintings and engravings copied. If you happened to have a ‘country mansion’ Mr. Wheeler assured production of an image with the utmost accuracy.

Wheeler advertised regularly, providing details of his services and advising that ‘the length of sitting is reduced to a few seconds’, so wary members of the public could be assured that sitting for one’s portrait need not be a protracted exercise.

THE many Important Improvements recently introduced in PHOTOGRAPHY,
whereby the length of sitting is reduced to a few seconds, and a depth of
tone and fidelity of outline, superior to the finest engraving is secured,
enables the Daguerreotypist to produce portraits that delight as much from
the wonderful preservation of the most transient and pleasing expressions
of the human countenance, as from their well-known accuracy.

The public are respectfully invited to satisfy themselves of the truth of the
above remarks by paying a visit to J. WHEELER'S Photographic Rooms,
Reading's Store, Victoria Bridge. [2]

In addition to taking portraits, a range of other views such as those of Maitland and Sydney as well as a number of ‘celebrity portraits’, including that of the Governor General, were available for purchase. [3]

Also offered for sale were views taken by the collodion process. 'These, together with numerous
specimens, comprising every novelty in the Heliographic Art, may be seen daily from Nine a.m. to Four p.m.' [4]

The Maitland Mercury was full of praise for Mr. Wheeler’s work in March 1855 and also points to Maitland people and scenes as subjects of the photographer such as the “very interesting sketch of East Maitland, taken from the new bridge”:

Mr. Wheeler's Daguerrean Gallery. We would strongly recommend our readers to pay a visit to the above establishment. With-out they see the beautiful style of the likenesses they can form no idea of what they really are. Among the various specimens on view are many of our old Maitland friends, some of them the most perfect we have ever seen. There is also on view a very interesting sketch of East Maitland, taken from the new bridge, which is well worthy of inspection. The most striking feature about the likenesses is the beautiful clearness of the picture-the preservation and transparency of the half tones-and the entire freedom from distortion of the hands, &c.-everything is so clear and distinct that you must admire them. [5]

Wheeler’s series of advertisements in April 1855 promoted his stereoscopic portraits in the most convincing terms. [6] 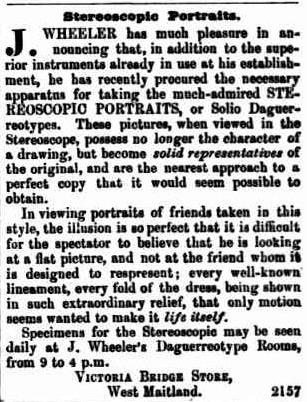 Portraits were complete with a ‘neat morocco case, that may be sent safely to any distance’, addressing the problem of the fragility of the daguerreotype image.

After a visit to Sydney, Wheeler advertises the reopening of the Maitland daguerrean gallery, having brought with him ‘many valuable additions and improvements in photographic apparatus, and is now possessed of the necessary materials for colouring Daguerreotype Portraits, in the best possible style. [7] Only one month later in July 1855 the Maitland photographic rooms are again to be closed as numerous engagements in other parts of this district will prevent h
is stay being prolonged beyond that date.

From Maitland Wheeler travelled north, opening the Brisbane Photographic Rooms in August 1855, returning to Sydney in 1856.  [8]