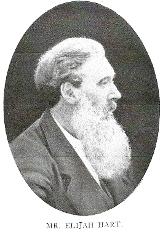 Apart from a number of months in Newcastle in 1855 and again in 1862, Hart works in Maitland and is part of the community for
19 years.

In 1857 Hart was the first to photograph Maitland's floods  and his  post-flood streetscapes provide a rare record of early Maitland.

As his photographic business drew to an end in the 1870s, floods are again a highlight of his work, being used by the Illustrated Sydney News in 1870.