The business of itinerants Miller and Engelhart began in Maitland on October of 1855, with the following advertisement which proved to be incorrect and confusing by its use of the name Hart rather than Englehart:  [1]

Four days later, an erratum appeared, pointing out that the notice should have read not Hart and Miller, but Miller and Engelhart.  [2]

The position of Mr. Elijah Hart was made clear in a notice a few days later:  [3]

Hart was unable to avoid Miller and Engelhart as both businesses had adjacent notices in the Maitland Mercury:  [4]

Miller and Engelhart then announced the closure of their gallery in January:  [5]

By February, the photographers had moved on to Morpeth, taking collodiotype portraits ‘for a few days longer’. [6] 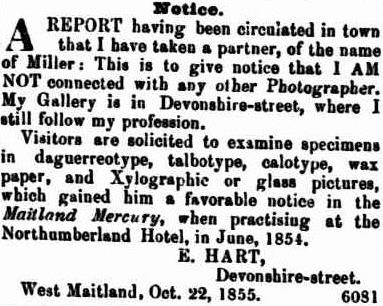