A feature article runs in the Mercury of 21 June 1870 discussing the art of landscape photography, as opposed to portraiture, the predominant form for local photographers, with Moss and Youdale exemplified.

Mr. Moss purposes to make a tour with an omnibus, which is in effect a moveable photographic gallery in most respects, and is provided with the appliances for out-door photography as completely as if it was a stationary building and Mr. Youdale has the same object in view.

No further evidence has been located to suggest these plans were carried out at this time.

Another interesting point in this article is the mention of floods causing changes along the river bank:

With floods playing such strange pranks about our river banks, photographs of the river in its old state will acquire an additional historical interest; and if things go on as they are, we question whether it not would be wise to secure a panoramic view of West Maitland itself, seeing that it is threatened at once by the river, and the prophets of evil, with annihilation at no distant date. A photograph of the former river bank from Mr. Youdale's to the Belmore Bridge presents a picture of which not a feature now exists, and equally great changes may very well be recorded in other localities.

Among some recent out-door photographs, we suppose put forward by the rival artists as specimens of the proposed series of views, was a view of' Sans Souci, by Mr. Youdale; and by Mr. Moss, a representation of the great landslip at the rear of Messrs Owen & Beckett's premises, both very meritorious, each in its different way. Speaking of photography reminds us of two very beautiful portraits on view in Mr E. Hart's  window, by a new process called the "photo crayon" process, which seems to combine the fidelity of a photograph with the softness and delicacy of a chalk drawing.  [1]
Elijah Hart’s new process is also mentioned.

In a prominent advertisement in October of 1872 Moss announces he will be leaving Maitland, ‘therefore parties wishing to get a good portrait taken will be obliged to give an early call.’  [2]

Relocating to Newcastle until 1874, Moss’ studio in Maitland becomes the Bank Portrait Rooms in November 1872. [3]

On his return to Maitland in 1874, [4] Moss resumes business as manager of the Great Northern Photographic Company,  with a change of address to “nearly opposite Mercury Office” rather than his previous location opposite the Bank of New South Wales, but still in High Street. 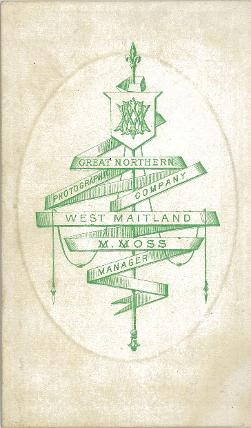 1876 sees some major changes for Moss with the remodelling of the gallery and obtaining the services of Mr A. Chandler, of Sydney, “whose name is a sufficient guarantee, that all work for thefuture will be executed in the latest and best styles of the art.”[5]

When photographs of Maitland are to be produced for show at the International Exhibition, Maitland Mayor notes that Mr. Moss, of West Maitland, had a commission from the Government for this purpose ,[6] however no further information regarding Moss’ role with the international exhibition appeared in the Maitland Mercury.