One of the first references to George Kedwell in the local news is in relation to his role in a dramatic performance at the theatre, being a member of the Maitland Garrick Amateur Dramatic Club. The performance was very much a success and ‘frequently applauded’. [1]

Kedwell goes on to feature as frequently in the Maitland Mercury for his theatre involvement in fundraising for local charitable causes as for his photography. His contribution to the local community over the years is formally acknowledged by the populace of Maitland in 1900.

Kedwell’s initial experience in Maitland photography came as the assistant of Morris Moss, opening the new Moss ‘Elite’ studio in September of 1886. Some three years later he would become the manager of Moss’s studio. [2] 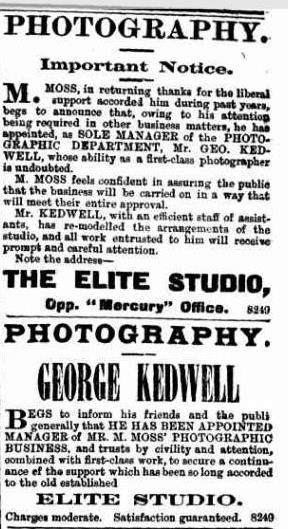 The Mercury praised Kedwell’s efforts, including a mention of a ‘new style of portraiture’:

Fine Photographs.-Yesterday we were shown a vary excellent collection of photographs taken at Mr. M. Moss' studio, West Maitland, since Mr. George Kedwell, a capable young gentleman, who has been with the proprietor for many years, assumed the management of the business. Mr. Kedwell's preferment is a recognition of his industry and skill, and judging from the photographs placed before us the confidence reposed in him has not been misplaced. The batch we saw were very excellent photographs, and included some enlargements in a new style of portraiture. [3]

Kedwell had also been applying himself in his studies, passing a technological exam in photography in September 1890, with Morris Moss acting as one of the superintendents. [4]

Between the years of 1891 and 1901 Kedwell appeared in the Mercury on a regular basis, with increasing recognition of his abilities as an amateur performer and entertainer, particularly in comedic roles. Descriptions included Kedwell “convulsing the audience” at the Pearl Cricket Club’s Concert, he “brought the house down” at the Band of Mercy Concert, and at the dramatic and musical evening in aid of St Peter’s Church, “Mr G. Kedwell closed the concert with a humorous ditty in his inimitable style.”

May 1893 saw a major change for Kedwell on a professional level as he assumes the responsibility of the Dore Studio from John Pickering, located in Hart’s Buildings, 418 High Street.

THE DORE STUDIO.-In another column, Mr. G. Kedwell announces that he has succeeded Mr. Pickering in the Dore Studio, Hart's Buildings, West Maitland. Mr. Kedwell is well-known as a jolly good fellow whose talents have always been at the disposal of promoters of charitable entertainments, and to those who have sat to and not under him, as a conscientious and able photographer. He now solicits the support of the public on his own account, and not only has he acquired all Mr. Pickering's negatives, but has added to the studio such modern accessories as will make it the most complete in Maitland.[5]

The Dore Studio’s promotion relied on repetition rather than innovation, this advertisement (right) appearing regularly in the Mercury from August 1894 to July 1895. [6]

Comments by the Mercury editorial writers also assisted Kedwell’s photographic profile, although these were not frequent.

One way in which people can delight their friends is by sending them their photograph, which we are reminded of by a peep into the Dore studio of Mr. G. Kedwell, where specimens of various classes of work are on view, including the platinotype process. Mr. Kedwell has been making additions to his studio in the shape of work rooms, where the shadows of sitters are developed, with the aid of the latest improvements in the art. [7] 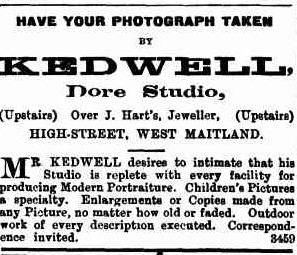 Without the ability to publish photographs in the newspaper, the Maitland Mercury printed illustrations based on photographs. Kedwell’s images feature twice in October of 1898, one being a portrait of Father Corcoran, the first resident priest appointed to the parish of Morpeth. [8]

A few weeks later, an illustration of the Lands Office at East Maitland is printed in the Mercury, again the work of Messrs. H. Shields and A. Baker, from a photograph by Kedwell.  [9]

Kedwell’s service to the community certainly did not escape notice and appreciation, with some misfortune for the Kedwell family in early 1900 being responded to by a show of public support. An ‘enthusiastic meeting’ was held to consider the best means of recognising Kedwell’s services to the town and district. [10] The outcome was a very successful complimentary benefit at the Town Hall.
There was scarcely a chair vacant in the large hall, and the audience was thoroughly representative of the best families in the town and district, testifying at once to the high esteem in which Mr. Kedwell is held, and being a sterling and appreciative acknowledgement of the valuable services rendered by that gentleman in the cause of charitable and other objects during the past fifteen years. It was certainly the most successful benefit entertainment ever given in Maitland. [11]

Just over a year later, misfortune was to visit Kedwell again, this time in the form of a fire at Hart’s Buildings, the origin of which was not determined. The damage was significant, with the rooms used by Kedwell being completely gutted and contents destroyed. [12]

Kedwell responds to the disaster with information that he will resume his studio business, but in the interim welcomes orders for outdoor photography.[13] 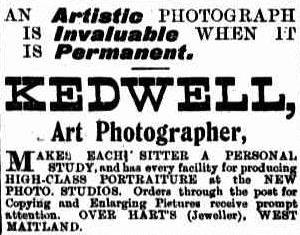 The new studio opens in July 1901, the detailed description in the Maitland Mercury providing an insight into a 1901 photographer’s working environment.  [14]

Kedwell’s wider recognition as a photographer is indicated by the July 1901 edition of the Australasian photographic review including a mention of the re-opening of Kedwell’s studio. [15]
Kedwell relocated to Sydney in 1904, the Maitland Mercury printing a notice for the auction sale of household furniture and effects at his residence in Church Street, in consequence of Mr. Kedwell leaving the district. [16]
An entertainment event at the Maitland Town Hall was organised as a farewell gesture to the Kedwell’s. [17]

The photographic business was acquired by the Venice Studios of Sydney, under the management of Mr. Tonge.[18]

A month later, John Pickering  makes an encore appearance in Maitland as manager of the Venice Studios, advertising his extended experience in high class portraiture, which will be a guarantee to all patrons. The most modern processes supplied at Sydney Prices.  [19]

In Sydney, Kedwell becomes the proprietor of the Edinburgh Castle Hotel, on the Corner of Pitt and Bathurst streets, with ‘every convenience for country travellers’. [20]

George Kedwell’s obituary in the Maitland Mercury states that he died at a private hospital in Waverley, New South Wales on 4 March 1925, aged 60   .[21]