“Disastrous Fire at West Maitland – Six Buildings Destroyed – Other Premises Damaged" reported the Maitland Mercury on 21 December 1886. One of the buildings that escaped serious damage was Naismith’s studio, but the scorching heat blistered the sign board at the front of the premises.  His neighbour, Mr Maher, assisted the fire fighting effort, only to be looted, with 'some mean fellows making off with several hams and other goods.'[1]

Apart from photographing a football match in June of 1886 with Northumberland v. Wallsend and an event to mark the installation of an engine at Homeville Colliery, where ‘many prominent businessmen of West Maitland were present’ in December of the following year, Naismith’s photography seems unremarkable.

Naismith was associated with what the Mercury referred to as a ‘very sudden death in particularly sad circumstances’ :
…Naismith left  for the purpose of having a smoke and was absent about ten minutes, and upon his return he saw his friend still sitting at the table, but noticing something peculiar in his appearance he touched Rae, whose lifeless body fell on to the floor. Mr. S. Shearer and Mr. Kelly were on the premises inspecting a negative, and on Mr. Naismith making the sad discovery he shrieked and I called out "Poor Jim is dead." A constable was passing the house, and he was made acquainted with the circumstances. Dr. S. A. Alcorn gave it as his opinion that after suffering from rheumatic fever deceased developed heart disease, which was the cause of death. [2]

A Mr John Naismith was also reported in connection with a death in June of 1886, but it is not clear if this was the photographer or someone else with the same name. Photographers Moss and Kedwell were also named in the article. [3]

This advertisement from 9 May 1891 indicates that Naismith’s is now the N.S.W. Photo Co., operating for a short season. [4]

The date that Naismith’s photography business ceased is unclear. Andrew Burg includes “John Naismith the top portrait photographer” in his Walk down High Street, 1901. [5] Sandy Barrie lists Naismith as operating in Maitland to 1895.  [6] 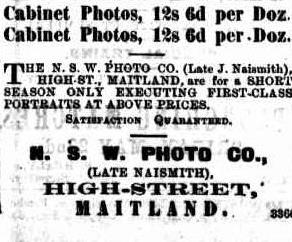