Following the sale of his property in Quirindi, H. B. Solomons commences business in Maitland, details being reported in the Maitland Mercury of 20 September 1879:

The premises now occupied by Mr. H. Solomons, tobacconist, &c, High-street, opposite Mr. C. M. Clark's, have undergone some extensive changes recently, both in the interior and the exterior of the building. The front shop has been enlarged to nearly double its former size, by removing the partition dividing it from the rooms on the left, and its appearance has been very much improved… Mr. Solomons has had a photographic gallery erected at the rear. It is raised some twelve feet from the ground, is twenty-two feet long by eleven feet wide, and is lofty and well lighted. [1]

Solomons’ advertising in the Maitland Mercury was basic, appearing in the ‘wanted’ columns in the form of:

WANTED, everyone in Maitland to look at my PHOTOGRAPHIC SPECIMENS
OF PORTRAITURE, in the New Show Window, and to judge for themselves. [2]

The West Maitland Weekly Post was used for more elaborate advertising of the ‘neatest gallery in the Northern district’ and 'for excellence of results we are unsurpassed'. The gallery's location is noted to be 'next Falkiner’s, High Street'.

On this same page of the West Maitland Weekly Post, Solomons also advertises his other wares: tobacco, bookselling, stationery, picture and fancy goods shop, to which the photographic gallery has been added. [3]

The photography business seems to have been attracting sufficient custom to allow Solomons to sell off his tobacco and stationery stock (that had been advertised only a month earlier) with the shop being wholly devoted to photography.  [4]

Solomons was still soliciting for patronage via the ‘wanted’ columns in December of 1879 [5] and the following year a most enthusiastic Solomons declares a "triumph": [6]

TRIUMPH!!!
H.B.SOLOMONS, PHOTOGRAPHER, has now in daily use an instrument by which
portraits are  taken without the sitter being aware of the precise time. This is a
great boon to nervous sitters, and above all, the success attending its use in
Photographing Children is certain. Every variety of Photo work is now being
produced with success at the EXCELSIOR GALLERY.

At this time Morris Moss and H.B. Solomons are direct business competitors, with Moss having a large advertisement of his own immediately above Solomons ‘triumph’ in this column of the Mercury.

The name “Excelsior Photographic Gallery” is used by Solomons and a number of other photographic business also use this name (or close variations) such as Glaister's in Sydney in the 1850s and Maitland photographer Martin Roggenkamp in 1859.

In July 1880, less than twelve months since establishing, Solomons relocates to Armidale, his Maitland business being purchased by Timothy Noble. 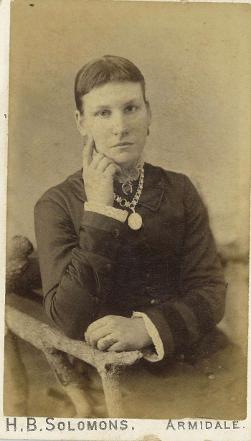 A number of Solomons other photographs taken at his Armidale studio are online via the State Library of Victoria.[7]

This portrait (right) of Sir Henry Parkes from the State Library of New South Wales is identified as 1887, photographer H. B. Solomons' Una Studio, Armidale.  [8]

The only reference to a Maitland photograph taken by Solomons appears in the catalogue of the State Library of New South Wales: Series 02; Isobel Bowden - family photograph albums, 1865-1895: Portraits taken by various Sydney photographers, plus country photographers including H.B. Solomons, West Maitland…[9]

The Roger Vaughan photograph collection also has an example of Solomons’ Armidale work. [10] 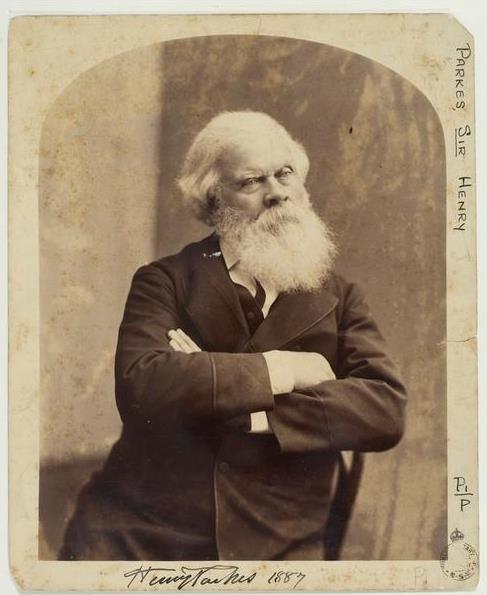