A court case in March 1858 is the first reference to Thomas Frederick Tinson in the local news. The action is brought by Tinson, a cordial manufacturer of West Maitland, against a publican at Black Creek, who had not payed for products supplied by Tinson. [1] 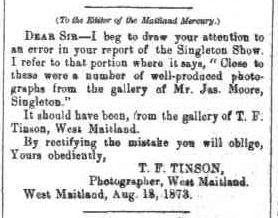 The appearance in the news of Tinson as a photographer comes in 1873, when ‘admirably executed photographs’ featured in the Northern Agricultural Association’s Show at Singleton in August of that year. Tinson did, however, correct the Maitland Mercury correspondent on an error in the report. [2]

In the Maitland Show of the following year photographers Tinson, Audet and Curtis have all submitted collections of photographs.[3]    Curtis and Tinson have both recorded photographs of the 1875 flood.[4]

Tinson is located at Oakhampton at this stage, although he is associated with Singleton via his Show exhibitions, as well as an announcement in 1876 that he will be in Singleton for the races, ‘prepared to take portraits in the best style of the art’, also able to photograph favourite animals.[5]    Tinson’s itinerant work appears to increase through 1878, with the Scone correspondent for the Maitland Mercury commenting “Mr. Tinson, photographer, is still practicing here, and some of the portraits I have seen, as well as several views of Scone, are very good.”[6]

In October, Tinson advertises that “At the request of several families, Mr. Tinson will stay until the middle of November.”[7] Although travelling to Quirindi in March 1879, Tinson’s address is still recorded as Oakhampton in the Sands 1878 directory and a Mr. Tinson is among the first to assist in a house fire at Oakhampton Road in April 1879.[8]

Both Moss and Tinson exhibit photographs at the Singleton Show in 1879 and 1880, with each of them awarded prizes.[9]

Travelling resumes with visits to Muswellbrook and Scone in 1883, with Tinson back in Maitland in 1884. The Singleton Borough Council are in receipt of a letter from Tinson with regard to photographs of the Colonial and Indian Exhibition, with Mr. W. Slade submitting a similar letter. [10]  A lack of funds being generated by photography could be inferred from Tinson’s move to reopen the cordial business in November of 1885. [11]

The cordial business was in operation until at least 1893, but Tinson’s role as a photographer seems to have slipped away.

The sole Tinson photograph located to date is that of Rourke's Saddlery in High Street, Maitland. 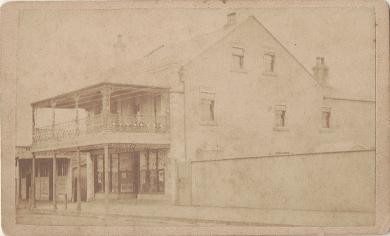 Rourke's second shop (now  421 High Street)  was erected in 1893, immediately to the east of the building in this photograph. [12] 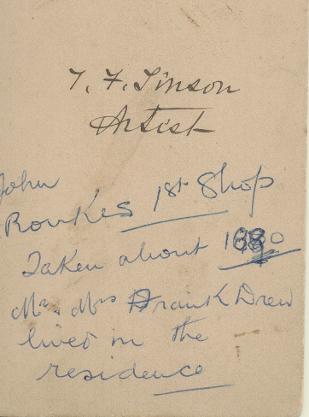