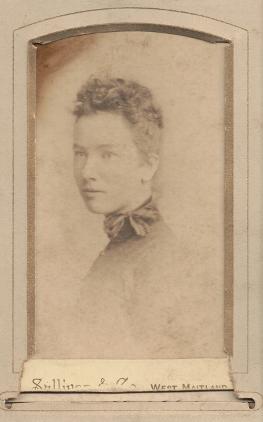 Image : Wollombi Museum
Cardboard mount has (unfortunately)
been trimmed to fit into an album.

The fortunes of Arthur Sullivan and John Pickering are combined between February 1889 and November 1891, during which time Pickering is the manager of Sullivan’s studio, located at Hart’s buildings in High Street. Pickering remains in the background of the Sullivan story until he assumes the business in his own right.

Sullivan makes use of large display advertising in the Maitland Mercury to draw the attention of the public, a strategy that he continues to use on a regular basis. [1]

Indeed throughout his time in Maitland, Sullivan gives the impression that he thoroughly enjoys   being centre stage, his showmanship includes local theatrical productions as well as advertising extraordinaire.

Pickering is introduced as the manager, previously from the Dore Studio in Sydney.

A week after this advertisement Arthur Sullivan finds himself at the West Maitland Police Court and being fined (10s with 2s 6d costs) for having a vehicle which he was driving after sunset insufficiently lighted.  A lengthy letter to the Maitland Mercury allows Sullivan to explain the mitigating circumstances, including the fact that he was a newcomer to town; the wheel of his sulky had jolted over one of the turncocks in the road, and shook one of the lights out; thought he was being chased by a larrikin “(as you call it in this country)”rather than an official; he did not know the local laws, but if the gentleman would be so kind as to tell where  lamps could be bought that warranted not to jolt out when one wheel bounds over a rock, he would buy them, and  would never have cause to exert that gentleman  on his account again.  [2]

Despite this introduction to Maitland, Sullivan makes a positive impression in the three years of his residency, not only as a photographer but as an entertainer as well.  [3] 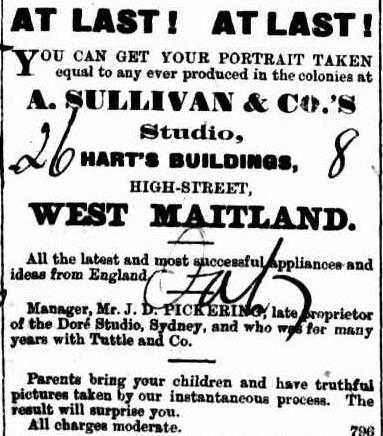 Promotion of Sullivan’s studio is by way of the following wordy advertisement which runs regularly from March to June of 1889.  [4]

If you want a true and faithful likeness you can get it in your town at
SULLIVAN & CO.’S       High Street Opposite the Bank of Australasia

Messrs. SULLIVAN & CO. take much pleasure in thanking the public for
the very hearty patronage they have received, which shows that the people
of Maitland and district can thoroughly appreciate our artistic work which
we send out at very moderate charges ; and we hope for a continuance of
their support which we shall always endeavour to deserve.
KINDLY NOTE – sunshine is not necessary to produce good portraits.
The light on wet or cloudy days often produce better pictures than a
bright sun.
All the latest and most successful appliances and ideas from England.

Manager, Mr. J.D. PICKERING, late proprietor of the Dore Studio, Sydney,
and who was for many years with Tuttle and Co. Parents bring your
children, and have truthful pictures taken by our instantaneous process.
The result will surprise you.                   All charges moderate.

The flood of June 1889 provided another promotional opportunity for Sullivan, whose views of the flood photographs ‘should be eagerly sought after by all who wish to have in their possession mementos of one of the most alarming events which has ever occurred in this district.’ [5]

The involvement of the government astronomer, Mr. H. C. Russell, adds both prestige and an endorsement of the studio’s work, requesting from Sullivan views of the flood at its highest point,including the height of the water at the Belmore, Long, and Victoria bridges.  [6]

Sullivan’s advertising in the Mercury is consistently bold and large, drawing the reader’s attention to his business [7] [8] and he  invests continually in display advertising, a number of advertisements appearing on a weekly basis for several months 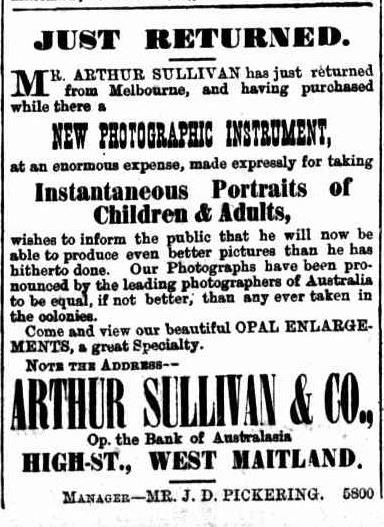 Mrs. Sullivan contributes to Maitland news with her encounter with a local reptile (with some wry humour on the part of the writer?)  :
On Thursday afternoon Mrs. Sullivan, wife of Mr. Arthur Sullivan, photographer, had occasion to enter the kitchen attached to the house, when she encountered a brown snake, which was wriggling on the floor. Mrs. Sullivan took up a poker and courageously attacked the reptile, which she succeeded in despatching, severing the head from the body. Not satisfied she hammered the head till it was beyond recognition. Gathering up the parts with a pair of tongs she placed them in a bottle containing kerosene, and left them till her husband returned from business. The snake was about eighteen inches long. [9]

Interspersed with Sullivan’s photographic enterprise is his persona as an entertainer, commencing with a concert in aid of fund raising for the Mechanics’ Institute at Branxton. Both Sullivan and his wife taking high acclaim in the Maitland Mercury, which also refers to 'the highly successful professional career of these artists' being well known.  [10]

On the same page of the Mercury in 8 March 1890, Morris Moss’ fine views of the recently-erected Town Hall were being praised, while Sullivan’s services were secured for a charity concert at that same new Town Hall, allowing patrons the ‘opportunity of judging the acoustic properties of the hall.’ This ‘Moonlight Concert’ had been arranged by Albion Cricket Club, whose photograph is reproduced in the Jackson and Williams information.  Photographer George Kedwell  also features in the cast.  [11]

In September Sullivan again collaborates with another photographer, this time Mr. E.T. Irving, (who is also associated with Sullivan’s business) in a fund-raising concert for the Maitland Benevolent Society; Irving assists Mr. & Mrs. Arthur Sullivan in their sketch, ‘Off to the races’. [12]

Continuing Mr. Sullivan’s photographic pursuits, an advertisement claims that 880 children have been photographed in the last twelve months. Using a jocular tone, Sullivan points out the acquisition of new equipment from Melbourne, with which he ‘hopes to turn out photographs that cannot be excelled in any of the Colonies.’ He also advises an entirely new arrangement for taking children, encouraging mothers to bring in their ‘little ones’. [13]

Shortly after this, E.T. Irving announces that he has severed his connection with Sullivan, commencing business on his own account. [14]

An extraordinary advertisement by bookseller W. T. Poulton appears in January of 1891, [access full advertisement] Poulton claiming to have purchased the entire edition of the forthcoming History of West Maitland, shortly to be issued by the Illustrated Map and Business Directory Company. The publication was to include a history of the town, together with a panorama of West Maitland. “The premises of the whole town having been photographed singly by Mr. C. Bayless, of Sydney, and Mr. Sullivan of this town.” Mr. C. ‘Bayless’ was presumably Charles Bayliss who joined Henry Beaufoy Merlin’s American and Australasian Photographic Company in 1866.

The American and Australasian Photographic Company was in operation in Maitland towards the end of 1870 through to January 1871, with the aim of photograph every house in the town. [Maitland Mercury 3 December 1870, 19 January 1871] This was some twenty years earlier than the forthcoming ‘History of West Maitland’, but it could be assumed that these were the photos intended for that publication.

In any event it may be a moot point – the publication seems not to have been produced, without any further references in the newspapers of the time. If it were to have been published, an abundance of Maitland’s history would have been captured; unfortunately this does not appear to have occurred. 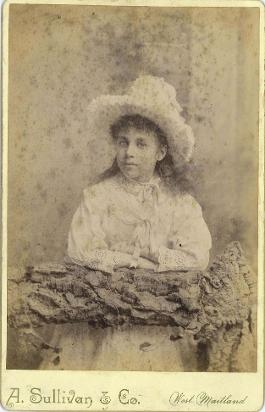 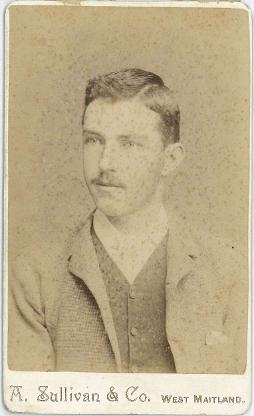 The Sullivan studio starts to fade from view at this stage, although Pickering is keeping up some momentum:
FINE PHOTOGRAPHS.—We have been shown by Mr. J. D. Pickering, manager for Messrs. Arthur Sullivan and Company, West Maitland, some fine specimens of photography which have recently been executed at the studio. They include a group, splendidly finished, of the Half Holiday Rugby Football Club, the post office staff at West Maitland, the officials in the Telegraph department, and several portraits of well known Maitland residents.  [15]

By November 1891 the Sullivan name disappears from the Maitland Mercury and Pickering announces the he has taken over the business. [16]

While Sullivan, ever the showman, made constant use of large display advertising and plenty of publicity, perhaps capturing  more space in the pages of the Maitland Mercury than any other photographer, his photographic legacy appears less flamboyant.